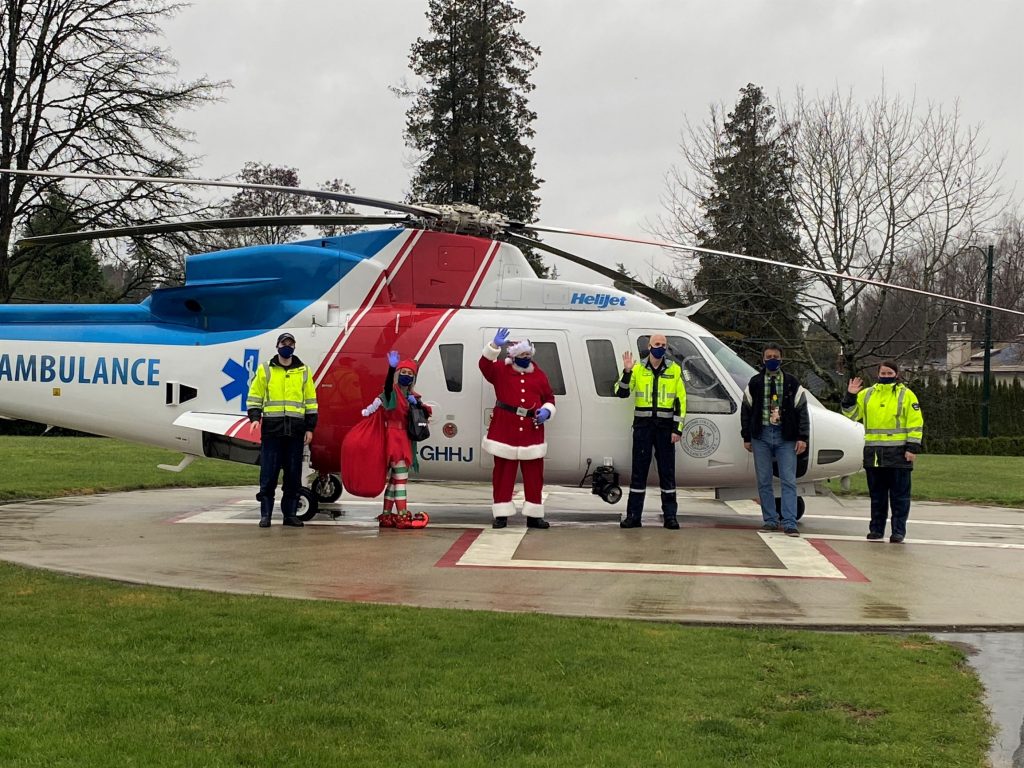 2020 marks the first time in 16 years that Santa Claus isn’t able to personally visit local hospitals and bring gifts to children. Nonetheless, with the help of Helijet and BC Emergency Health Services (BCEHS), toys from Santa will still be delivered to children in hospital this week.

Normally, Santa’s flying from hospital-to-hospital in a BC air ambulance in the final days before Christmas, strolling through hospital corridors and handing out toys to children in pediatric wards. This year however, hospitals are limiting the number of visitors due to pandemic protocols aimed at protecting patients, their families and hospital staff – and Santa is 100 per cent behind it.

So this year, Helijet and BCEHS are helping by flying or shipping toys directly to hospital staff to hand over to children in pediatric units at BC Children’s Hospital and BC Women’s Hospital + Health Centre, plus Victoria General, Surrey Memorial, Royal Columbian, and Nanaimo Regional General Hospitals. Helijet operates the province’s air ambulance helicopters for BCEHS.

“COVID-19 has had a profound impact on all of us in countless ways this year. That why I’m especially delighted to hear that even without Santa’s personal hospital visits, BCEHS and Helijet have still found a way to bring some smiles to young patients spending the holiday season in hospital,” said Adrian Dix, Minister of Health. “We’re all waiting for a sense of normalcy to return and once it does, hopefully conditions will allow Santa’s air ambulance flights from hospital-to-hospital to resume again this time next year.”

Despite this year’s change in plans however, Santa still insisted on doing at least one special flight. So, he and his entourage including Helijet President and CEO Danny Sitnam and BCEHS paramedic Jeff Scott personally flew the first round of gifts directly to the hospital helipad outside BC Children’s Hospital for pickup.

The toys were accepted at the helipad by BC Children’s and BC Women’s hospitals representatives and two young BC Children’s patients who came with their parents to greet Santa on behalf of all the young patients at the hospital.

For Jeff Scott, a specialty-trained Infant Transport Team (ITT) paramedic, the brief stop was an opportunity to take part in what has become an annual Christmas tradition.  “The opportunity to help Santa surprise children and their families in hospital this holiday season is something I am very proud to be a part of,” said Scott. “As an Infant Transport Team paramedic for 10 years, I often meet patients and their families during medical emergencies, so this is a wonderful opportunity to help bring some holiday cheer.”

Danny Sitnam of Helijet said they still wanted to do something for children in hospital this year, even if Santa couldn’t see them in person. “We wanted to make sure we continued the tradition we started way back in 2005 of spreading some happiness to children who aren’t able to spend the holidays at home as they should. Everyone at Helijet is proud to work every day with BC Emergency Health Services and its paramedics to provide 24/7 helicopter service for thousands of critically ill patients across the province and we’re pleased to give Santa a helping hand with his hospital toy deliveries this year.”

Enjoy the Perks of Flying Helijet

Enjoy the Perks of Flying Helijet