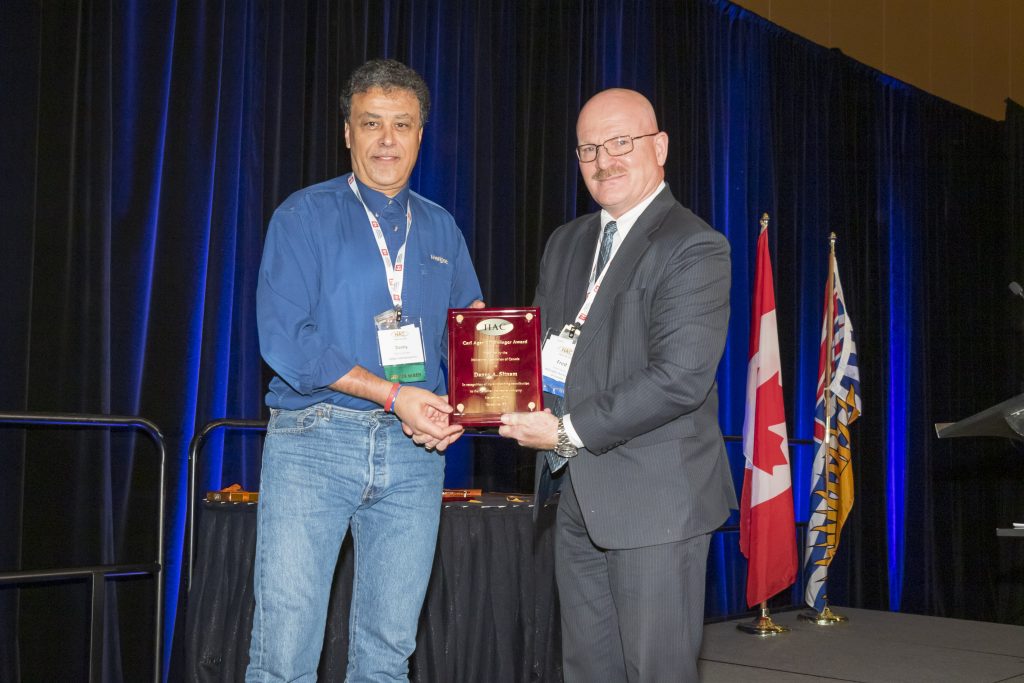 Daniel Sitnam, President and CEO of Richmond B.C.-based Helijet International Inc. has been presented with the Helicopter Association of Canada (HAC) 2019 Agar-Stringer Award for his lifetime contribution to the Canadian helicopter industry.

HAC President Fred Jones presented the award to Sitnam at the 2019 HAC convention in Vancouver, noting, “This award is well-deserved. Danny has been a pioneer in the Canadian helicopter industry in many ways. Under his leadership, Helijet has become a highly versatile company, succeeding as both a scheduled helicopter airline and an air ambulance provider. What’s more, Helijet is an industry leader in managing noise, promoting women in aviation, and doing charitable works in the communities they serve, among other things.” Jones added, “Too often, dedicated individuals in the industry go unrecognized. Our objective with the Agar-Stringer Award is to honour those who have a made a significant contribution over the course of their career.”

Sitnam embarked on his aviation career in 1977, training on a Hiller 21E in Pitt Meadows, B.C. He got his first job on the same day he obtained his commercial licence. Seven days later, he ferried a Hiller 21E to Mayo, Yukon and went to work for Mayo Helicopters. He flew light and medium utility helicopters in the Yukon, Alberta and Northern B.C. in the years that followed, but at heart he was an entrepreneur. By the mid-1980s he latched onto the idea that a scheduled helicopter service between Vancouver and Victoria operating multi-engine, multi-crew IFR-certified helicopters could better serve the market. Backed by a few gutsy investors, Helijet’s inaugural flight lifted off on November 27, 1986, thus launching a company that would profoundly change the face of commercial aviation in B.C.

Over the past 33 years, Helijet has grown to become the largest helicopter airline in the world, while also branching into a variety of fixed- and rotary-wing markets, including air ambulance, film, tourism, corporate, and natural resources, as well as heliport operations through a subsidiary company, Pacific Heliport Services. Today the company has a combined fleet of 17 helicopters and turbo-prop aircraft providing scheduled, charter and air ambulance services throughout B.C., North America, and beyond.

Along the way, Helijet has been recognized with numerous awards and recognitions for their commitment in supporting the communities and organizations they believe in. In 2017, Sitnam was inducted into the Canadian Aviation Hall of Fame.

“I feel humbled and privileged to receive the Agar-Stringer Award,” said Sitnam. “But I don’t see this award as being about me. It’s about the 170 professionals who go to work at Helijet every day, driving the company forward and making a difference to the people and communities we serve.” He added, “It’s also about family. My wife, Laura, and my children, Owen and Corra-Rose, have been my backbone and supported me all along.”