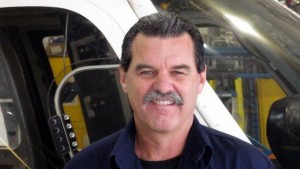 Helijet is pleased to announce the appointment of Kevin Robinson to the position of Chief Engineer.

Kevin has worked as an Aircraft Maintenance Engineer for 30 years – 13 of those years with Helijet.  Raised in Burnaby, Kevin grew up playing lacrosse, hockey and rugby for some very competitive teams, and has now transferred that talent to coaching some of his four daughters to medal status in lacrosse and hockey.

Trained in the Aircraft Maintenance Engineering Program at BCIT, Kevin graduated in 1985 and moved straight into his chosen field of aviation.   His career path started with Okanagan Helicopters, before moving on to gain experience at Helipro, Canadian Helicopters International, Tasman, CHC Global Operations, Heli-One, Merlin Aviation and including an 11 year period with Helijet.  In 2013, he returned to join the Helijet team in maintaining the Sikorsky S76 fleet at the Richmond, Prince Rupert and Sandspit hangers.

In light of Kevin’s extensive knowledge and experience with Sikorsky S76 aircraft, along with his overall fleet and production planning skillsets, Kevin’s appointment, effective January 16, 2015, as Chief Engineer is welcomed by the Maintenance Department, and the whole organization.